People for Parks wanted to help break the cycle of gang violence, and we did it with a soccer ball. Working with our partners in other agencies, we created our innovative Smart Recreation™ program with the goal of breaking apart gang rivalries and give kids sports programs as positive alternatives. 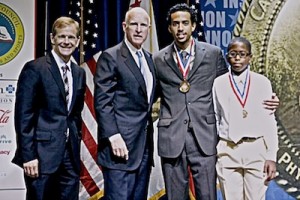 One Watts / Watts Unido was awarded a Gold Medal by the Governor’s Council on Physical Fitness in 2011 — the only county program of its kind to receive this honor.

Here’s the problem: kids from rival neighborhoods come together for the first time in middle school, and that’s where violent clashes based on neighborhood gang turfs can erupt. 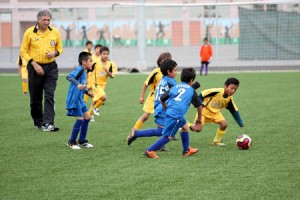 When we bring kids together from rival gang territories in safe play, we’re working to transform communities with safe play and new friendships.

Together with both LA City Recreation and Parks Department,  LA County Parks and Recreation, the Los Angeles Police Department and other partners, we bring kids from rival housing developments together to play on cooperative teams. Result: kids who might have become enemies play together on friendly turf.

The kids named our program One Watts –Watts Unido. They’re bridging barriers and building new friendships, and helping break down the toxic force of gangs.

We’ve built this program to help change the lives of kids, replacing blades of violence with safe play on blades of grass. Now, this program needs your help to bring it to other communities.

Watts is a vibrant community with a diverse population. It is also home to some of the most violent gang activity in Los Angeles. One Watts—Watts Unido is a collaborative program between People for Parks, the City of L.A. Department of Recreation and Parks and Los Angeles County Parks and Recreation and other agencies to offer a recreation program at Markham Middle School and Ted Watkins Park, designed to build a sense of community for young residents of the Nickerson Gardens, Imperial Courts and Jordan Downs housing developments. 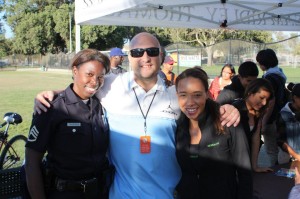 According to studies of Southern California gang members, the most common reasons for joining a gang are protection and territory. Studies also show that the most successful time to intervene is during the critical middle school years. One Watts/Watts Unido activities in Watts promote meaningful friendships that cross local boundaries, break down the territorial/protection reasons that foster gangs, and develop social skills and ability to make good decisions.
Our One Watts—Watts Unido program serves low income youth (ages 10-14) primarily from the Watts housing developments of Nickerson Gardens, Jordan Downs, and Imperial Courts. These housing developments are heavily influenced by rival Crip and Blood gangs. When our kids get to Markham Middle School, which draws from several rival neighborhoods, the resulting clashes based on gang alliances lead to high rates of truancy, vandalism and violence at school.
People for Parks is leading a unique collaborative program in the community that builds friendships across these barriers by creating sports teams that mix neighborhoods on the same team.  The initial pilot four years ago proved this is powerful even for the parents who came to root for their kids at games.

A Generational Transformation, Led by Kids

Gang involvement is often generational, and parents from rival neighborhoods learned they could cheer together for the same team.  In the first year, the results were a dramatic reduction of conflicts on the Markham campus. Our valuable partners in the collaborative include:  LA City Recreation and Parks, LA County Parks and Recreation, The Los Angeles Police Department, The Housing Authority of the City of Los Angeles, Markham Middle School, Watts-Willowbrook Boys and Girls Club, among other supporters.
In Watts, crossing the street can be crossing into enemy territory. So where it’s needed, we transport children in vans for what would be considered “walkable” distances in the suburbs. By bridging the divide of turf boundaries, that simple act of bringing kids together across “enemy territory” and playing together on the same team in each other’s neighborhoods has a very powerful effect.
Watts is one of the most impoverished communities in the country where families struggle to get by.  In more financially secure communities, family contributions through program fees usually cover the basic costs. In our case, we must raise the funds to cover essential safety equipment and the cost of the sentimental items that make our youth sports experiences special, like end of season awards ceremonies.  The end of season celebration is an essential part of solidifying the new friendships created in this program.
Do you like this post?
Tweet